A Project for Better Journalism chapter

The Devil's Advocate Currently under construction 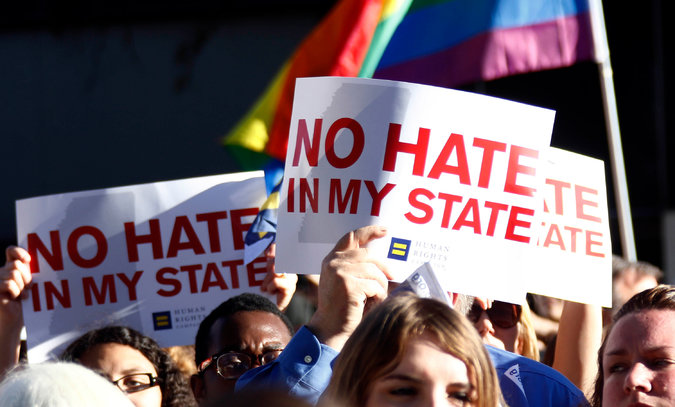 On March 22, 2016, North Carolina’s governor signed a controversial bill denying transgender people the use of public bathrooms for the gender they have chosen to identify as. The bill also restricts cities from passing nondiscriminatory laws. The majority of the Senate is comprised of Republicans, so when the bill “HB 2” was initially introduced the Democrats walked out in protest. Despite the Democrats’ opposition, North Carolina Governor Pat McCrory signed and passed the legislation. Since then, several other states have shockingly followed and passed similar legislation. This bill is a step completely in the wrong direction because it reverses the previous law that Charlotte, North Carolina passed a month before to protect gay, lesbian, bisexual and transgender people from being discriminated against by businesses. It is incredibly concerning that hate laws like “HB 2” are still being passed in the United States in the 21st century, and are causing other states to design and pass similar legislation.

Just days after the anti-LGBT legislation was passed in North Carolina, the American Civil Liberties Union filed a lawsuit challenging the discriminatory legislation in order to guarantee that everyone in North Carolina is protected by law. One of the plaintiffs Joaquín Carcaño describes North Carolina’s “HB 2” as “hurtful” and “demeaning.” He further explains how the law puts him in the horribly uncomfortable position of having to decide whether to use the women’s restroom where he does not belong or use the men’s restroom and break the law. This interferes with Carcaño’s ability to be productive and feel safe in his community. It is argued that the HB is in violation of the Equal Protection and Due Process clauses of the Fourth Amendment, which entails each state to provide equal protection by the law to all people under its authority and outlaws government officials from denying people rights of life, liberty, or property without legislative approval, ergo unconstitutional. Transgender people, like other American citizens, deserve equal rights and protection under the law.